Back At Your Door 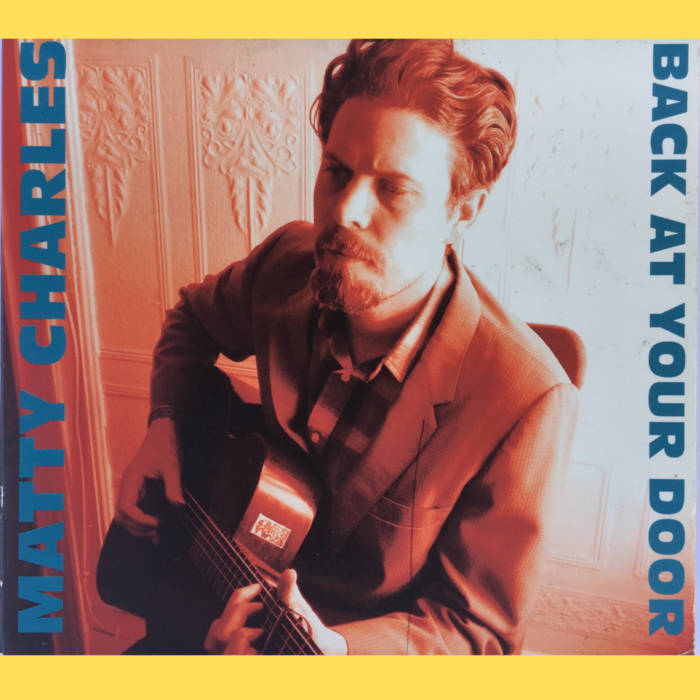 Back At Your Door is the third solo release by Matty Charles. This record reflects a spareness of style that calls to mind major songsters like Johnny Cash or Kris Kristofferson. There is also a poetic sensibility reminiscent of Leonard Cohen with a little Paul Simon thrown into the mix.

This album begins with the catchy bounce of, “Love’s Lost Quarter”, a song inspired by Charles’ experience of living in New York City for more than a decade. Charles sings, “They say that she’s a woman with a hammer for a heart, that she doesn’t give a damn about you when you fall apart.” and then, “...but I love her just the same. She’s beautiful and vain.” And he seems in awe of her power and allure, “I see her as a queen with lighted jewels in her crown and she shines so bright you see her for a hundred miles around.” It’s a succinct description of what draws and repels people to that great metropolis.

Then the record shifts gears and Charles is accompanied by acclaimed singer/songwriter and performance artist, Cynthia Hopkins for the compelling duet, “If I Fell Into You”. Their voices have a wonderful blend as they sing, “So darling, so darling if I fell into you, would you catch me and hold me and tell me it’s true?” The upright bass and the drums intertwine with the acoustic guitar in a lilting waltz that feels almost as delicate as the emotional resolution of the words being sung.

“Caravan of Misfits” and “Victoria, Victoria” are just acoustic guitar and Charles’ vocals while, “Drinking Again” jumps into the energetic stratosphere with it’s rock-a-billy drive and celebratory, self-destructive refrain, “She (booze) blocks out the light that I don’t want to blind me and she carries the fear from my soul. She locks all the doors so my heartaches won’t find me and I won’t feel the pain anymore”.

The overarching emotion of this group of songs is melancholy with a resigned acceptance about what life and love will do to the soul. It’s exactly what makes Charles such an iconic country song stylist and it’s what makes this record so rewarding to listen to; you can relate to it!
Ray Bayard (Reel Music Revue)

“Charles’ lyrics and melodies are insightful, engaging and catchy, and his guitar playing is superb. Great, great, great!” (Dagger Magazine)

“Charles writes with the broadness of his heroes, Nelson, Earle and Waits, but his singing edges towards the gravity of Waylon Jennings, the melancholy of Richard Buckner and the worldly, poetic edge of Kris Kristofferson or Paul Simon.” (Country Standard Time)

“Instead of songs about sadness that leave listeners feeling alone, Charles’ lyrics and smooth guitar riffs wrap their arms around his listeners and hold them tight.” (SF Reporter)


“Matty is a true gem. His songs are instant classics.” (Greg Trooper - singer/songwriter)

“I didn’t know they still made voices like Matty’s until I heard it. What’s even rarer is such a voice combined with such a writing talent...It blows me away every time!” (Devon Sproule - singer/songwriter)